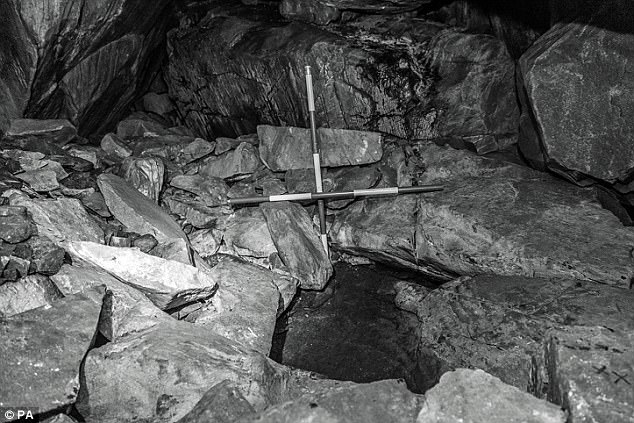 In 2016, hill walker Michael Chambers discovered a cave like structure among large boulders on Bengorm in the Nephin Beg Range in North Mayo. The chamber contained bone fragments and large pieces of quartz. Archaelolgists were called in and the bones were determined to be human and included remains from adults, adolescents. and children.

Louise Dowd of IT Sligo carried out a rescue excavation for the National Monuments Service. Analysis of the bones show that they were deposited in the Neolithic or New Stone Age, which covers a period of 6,000 to 4,500 years ago in Ireland. A bone from an adult was 5,600 years old, while a bone from the skeleton of a child was deposited some 4,400 years ago.

This was not a burial site. Archaeologists believe that the bodies were laid out in a pit and left to decompose. Some time later the skulls were smashed and the larger bones were removed. It is thought that the chamber was one part of a much more complex burial ritual.

This was just one of a range of questions addressed during last night’s Mountaineering Ireland regional meeting in Clonmel. More than 40 members attended with representation from 11 different clubs, including groups that had travelled from as far away as Tralee and Wexford.

Other topics discussed included ideas on how to encourage younger members to join clubs, suggestions that Mountaineering Ireland engage more with schools, colleges and Gaisce, and tips on how to enjoy the hills responsibly. Some of the resources available on www.mountaineering.ie were demonstrated including the Digital Log to record activities in the mountains and the Club Handbook.

Clubs were encouraged to participate in the Club Training Officers’ workshop on 24-25th February (venue TBC) and Mountaineering Ireland’s Spring Gatheringwhich takes place in the Galtees from 23rd-25th March.  There was time for chat and networking too!

And to answer the question above a club leader doesn’t need to have a formal qualification but should have appropriate experience, be able to navigate, choose and find appropriate routes, look after themselves and others.

When is a Leader not a Leader?

There is no light like the light you get on the mountains but you have to push yourself hard to be in a good location to capture it at it’s most extreme which for me is early in the morning.  It’s all about being out there, high up on a mountain ridge before sunrise. I usually setoff climbing about 2 to 3 hours in advance with a heavy backpack complete all essential mountaineering equipment plus my camera and tripod to capture the shot. The ice and snow add an extra dimension to the photographs but these shots can be difficult to take as you have to endure the ice cold winds for short periods of time without risking hypothermia.

Nature can often surprise you, it has been many a time that I was on a summit expecting certain weather conditions but only to come away with something totally different and yet equally as beautiful. For instance the photo titled ’Frost Flowers, Cruach Mor’ was taken the day after the photo titled ’Howling Ridge’, both photos are different and equally as spectacular. I could not stop myself going one day after the other, that weekend.

The day I captured the photo titled ’Frost Flowers, Cruach Mor’ was an experience to remember. I got up at 4.30am, checked the forecast and left home at 5.30am with the outside temperature at -1°C. It was 6.15am when I started climbing in dense fog with the aid of my headtorch and compass as I could only see 8 feet in front of me. I was about to give up on the chance of getting a descent photo as I neared the summit of Cruach Mor when all of a sudden I poked my head up above the fog, the top of the fog was only 10 to 15 meters below me as I stood on the summit. It was a sublime experience to be up there on my own and see all the highest peaks protrude above the cloud into a clear blue sky like islands in a sea of fog.

Photography for me is all about recording the landscape and weather as it unfolds, directly from nature – what you see and experience is what you get as the end result in a print.

This blog represents a particular viewpoint. It is about sport and is intended to encourage and facilitate greater participation by people – young, not-so-young, not-so-old, and old – in the sport of mountaineering. As such, it is driven by a strong commitment to equality of access and participation, skills development, and an abiding respect for mountain environments.

It is also intended to be  a resource for people who wish to progress in the sport of mountaineering. Many entries will deal with mountain skills and will tap into the knowledge and experience of the wider mountaineering community and Mountaineering Ireland,  the principal resource organisation for mountaineers in this country.

The blog is edited by members of the club. It is not intended to be representative of the club as a whole, but it does represent the views of a significant portion its active membership. The club is big with a diverse membership and, surprise surprise, we differ on a lot of things. It’s not the differences that we are interested in however, it’s the debate that enlivens every aspect of our sport.

So … look up and look out, there is a whole world of mountains to be climbed.

TMC is the second oldest in the country, founded in 1954.

The club has 237 members at present, making it the largest mountaineering club in Kerry. We have great diversity in the club. In the last year members have summited on Ama Dablam in Nepal and walked the North Kerry Way. In between there were regular walks in Kerry and climbing expeditions to Donegal and Scotland.

Our club has 3 grades of climbs, from easy to moderate and hard. This accommodates people’s fitness levels and preferences and encourage beginners to progress as mountaineers. We are also involved in rock climbing, moving to indoor wall climbing during the winter, except when there is snow! That’s when the crampons come out.

We operate system of club leaders and all leaders are members who take on the responsibility of leading climbs and expeditions.  Training is provided in navigation, rock climbing, and participation in REC first aid courses is supported.

Club Membership, despite our best efforts,  is still restricted to adults but individual members and members who are parents will work with young people who want to get involved in the sport of mountaineering, whether that is on way marked trails, mountains, or crags.

So don’t be put off by the ban. Drop us a line and get involved.

and in real time on the mountains: